My Memories of the Legends Release (June 1994)

The first article on Magic the Gathering I wrote gained zero interest but I'm hoping there's some MtG players and Investors on Steemit. I lived in Phoenix, AZ at this time and was introduced to the game by a work colleague. 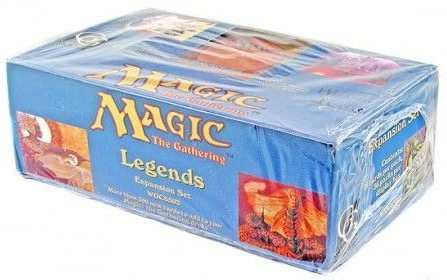 Legends was the third Magic the Gathering expansion released in June 1994, I know.. I was there and experienced it all.

I pre-ordered a sealed box from The Game Depot in Tempe and that was all I could have. The game store would not let anyone have more than a single box and it cost me the retail price, around $90 I think. The Game Depot in Tempe, AZ still exists, but has moved to a different location since I bought my box of Legends!

I managed to get some more boosters from nearby game stores but it was a struggle. Every one of them had an embargo once you had bought your quota, around 3-4 packs. Such was the demand and the lack of quantity.

I remember opening my sealed box; Jacques le Vert was my first rare, there was also a Nicol Bolas in there. Funny how you remember some things? 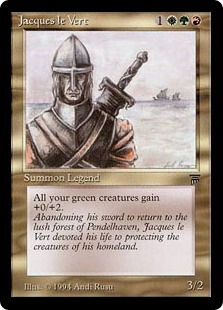 It seemed everyone wanted a full set of Legends, an impossible task as you just couldn’t buy them anywhere after the first week.

Some of the artwork was so cool looking. Just look at All-Hallows-Eve, a card it took me forever to get a copy of. There was a game shop named Roaming Panther in Chandler and a middle-aged guy was sitting there with THREE of these cards, how the heck did he get all those?

In mid-June I attended Hex-a-Con 4 in Tempe, this was a game convention that happened every year. I persuaded to attend by the same work colleague who had introduced me to the game.

Peter Adkison (Wizards of the Coast) was there, and was also looking to complete his Legends set. In fact he was so desperate that for every rare you gave him that he did not have, he would give you a sealed Arabian Nights booster pack. Holy Moley, What a guy! 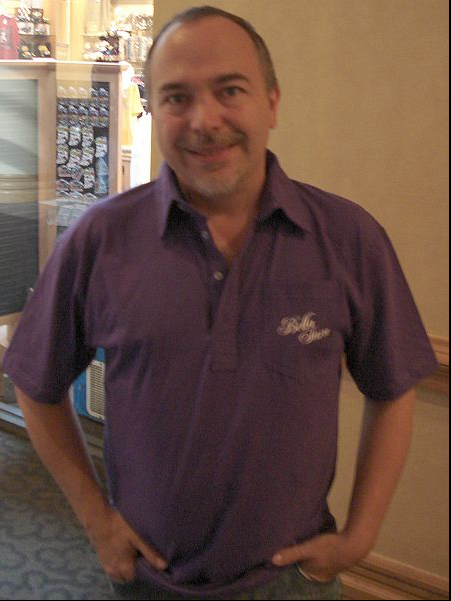 I managed to extract FIVE said booster packs, and no they were not scanned! From one I pulled a Juzam Djinn, I can’t remember what was in the others. On retrospect, I was sitting on a fortune.

Arabian Nights booster packs sell on eBay for around $575 each.

Legends sealed booster boxes are almost non-existent in the world now, here's one on Troll and Toad at a cool $7999.

Even the single cards are gaining a lot of traction simply because they are old, there were not many printed and they are being snapped up by speculators and investors. I still have a few, but not many.

This is a STEEM reprint of a post from almost 2 years ago.. - I still have a few Legends left, and some on the reserved list. At some point, I need to sell them

Submit
0.00 MARLIANS
234 votes
8
Authors get paid when people like you upvote their post.If you enjoyed what you read here, create your account today and start earning FREE STEEM!
Sort Order:
[-]
justinparke (66)  ·  4 months ago

I used to play MTG way back when!

It was great then, I knew every card in my head by memory. Not a chance now!

God, do I ever remember the days of the embargo on Legends. Stores in Indianapolis weren't much different -- Comic Carnival had a limit of two packs, per person, per store, per day. That led to a lot of people dragging along friends or family to cajole/bribe into buying packs for them, or store hopping where you'd hit the one on the west side, then the north side, then the east side, then the south side and run through a whole tank of gas to wind up with 8 total packs of cards.

Months after Legends dropped, it was still impossible to find packs, but one guy at a comics convention had them (and was selling them for $10 per pack, which I thought was price-gouging at the time, but hooo boy, today that would be the steal of all steals). I asked how it was possible he had these when no one else did, and he said he'd basically bankrupted himself doing it, but he'd acquired two palettes of them. They were, he advised me, his retirement strategy.

A palette contained 35 cartons. Each carton contained 12 sealed boxes. And each box contained 36 packs of cards. At a time when most of us were limited to 2 packs per person, per day, this guy had managed to come up with over 30,000 packs in one fell swoop, and was making a killing selling them on the convention circuit for much higher than standard retail (which was $2.99 at that point, if I recall correctly).

One palette, he opened entirely to parcel out as individual cards. The other, he sold as individual booster packs. Any sealed booster boxes out there, I would not be surprised if they belonged to this guy, and I hope he's retired somewhere besides Indiana. :)

They were good days, I was a right card shark too... terrible as it might sound. With no rarity colour on the symbol, if you have a good memory for values you could rape the unwary for their riches!

You have just been bro-fisted by the guys in the man cave and now have 1 more BRO. Enjoy!**

For more info, please give us a look in here: https://discord.gg/qd8J2x3

Hey @slobberchops, here is a little bit of BEER from @justinparke for you. Enjoy it!