Beyond the Bitcoin Hysteria - A Look at the Underlying Blockchain Technology Unless you have been hiding under a rock for the past year, you have probably heard about Bitcoin. The world's most popular cryptocurrency has been on a tear, rising to extraordinary heights and crashing back to earth just as fast.

Some Bitcoin fans claim that the cryptocurrency will one day reach a million dollars, while Bitcoin doubters claim its actual value is close to zero. From these two disparate opinions, it is clear that no one truly knows what a Bitcoin is truly worth, but assessing cryptocurrency on trading prices alone is missing the point.

If you genuinely want to understand the Bitcoin phenomenon, you need to take a look at the underlying technology. The thing that makes not only Bitcoin but Ethereum, Litecoin and other cryptocurrencies so intriguing is the blockchain on which they are built.

Whether Bitcoin eventually reaches a million dollars or crashes and burns, the underlying blockchain technology is unlikely to go away. Instead, the blockchain is likely to find its way into banking, retail transactions, and even the ballot box.

At the heart of the cryptocurrency revolution is the blockchain, a distributed ledger that can be shared, replicated and synchronized among many different users. Unlike a traditional banking transaction, which is centralized and stored in a single location, cryptocurrency transactions are stored on vast networks of computers.

The distributed nature of the blockchain ledger makes it uniquely resistant to hacking and other types of tampering. While hacking a single-point transaction requires nothing more than access to a centralized computer, hacking a distributed ledger as the one Bitcoin uses is far more challenging. Even if the bad guys gain access to a dozen computers on the network, there are thousands more holding replicas of the authentic blockchain. 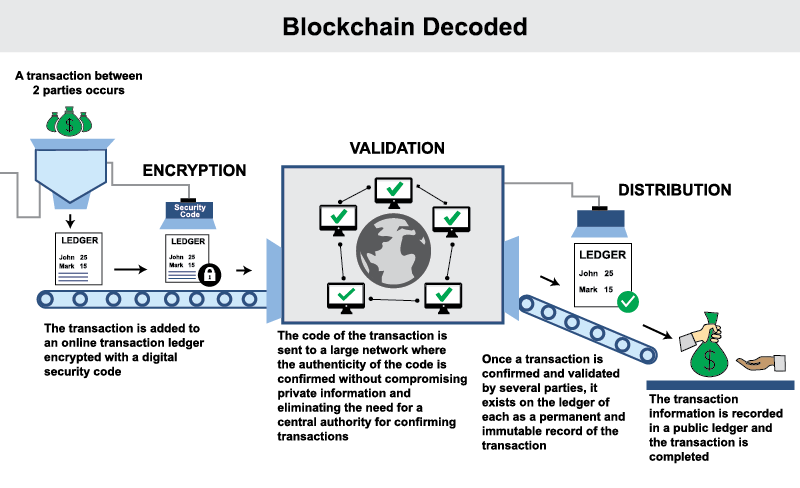 The distributed network is at the heart of blockchain technology, and the shareable nature of its database is what makes it so secure. Every participant in the distributed network agrees to abide by a single set of rules. There is no third-party mediator, no clearinghouse and no financial institution in charge. Instead, there are thousands, tens of thousands or more participants, all governing by consensus and doing their part to keep the network secure.

Every record on the distributed ledger contains authenticating information, including a timestamp and a cryptographic signature. All of these records, taken together, are what makes up the blockchain.

It is easy to see how this approach to record retention and the recording of transactions provides benefits that go far beyond the cryptocurrency market. Governmental agencies are looking at ways blockchain technology could make future elections more secure and more resistant to outside interference. Banks are looking at how blockchain could help them resist hacking efforts and spot fraud in its earliest stages. These are just two examples of how blockchain is changing the world, and those changes are likely to take place no matter what happens to Bitcoin and its cryptocurrency cousins. Submit
0.00 MARLIANS
64 votes
1
Authors get paid when people like you upvote their post.If you enjoyed what you read here, create your account today and start earning FREE STEEM!
Sort Order: